Tourist organization of the municipality of Backa Palanka
Home Where to go out and what to see? Folklore
Facebook
Twitter
WhatsApp
Telegram
Viber 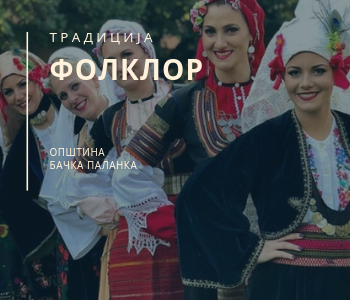 "Abrasevic" in its repertoire, since 1976, nurtures games from different regions, with an emphasis on tradition and multiculturalism from the environment in which he lives. It has a rich collection of folk costumes in its holdings, and it is also a mobile museum of traditional costumes. The quality of its work has been proven many times by its members on numerous performances and tours both across the country and abroad.

In the work so far, over 400 tours abroad have been recorded, followed by over a million spectators, as well as over a thousand performances in our country with an audience of millions.

Showcases and walls of Abrasevic are full of awards, plaques and recognitions. Among them is the October Award of the City of Backa Palanka (1988 and 2003), then numerous awards at the Festival of Folklore Ensembles of Serbia "Golden Opanak", the award of Radio Television of Serbia for the guardian of national heritage in the category of traditional dance in 2011 in the series "Plum" , plaques of the Association of Amateurs of Serbia, plaques of the Provincial Festivals of Music Societies of Vojvodina, gold and bronze plaques at the festival in Turkey, and many other awards.

After the cessation of active play and dance, this group of veteran folklorists continues to live their love from their younger days. They meet and play regularly, because they still have something to show to the audience and folklore lovers.

The association is more recreational than veteran, and there are people in Koreni who have never encountered folklore in their lives. They were founded on July 4, 2015, and officially started working on September 15 of the same year. It has about 40 members, but there are up to 25 of them at the rehearsals, because people are employed and often work at that time. They compose repertoires for the performance themselves according to the possibilities of the members, because there are people who are over sixty years old.

The first performance of this group was in an attempt to break the Guinness record in the mass play of cars, where about 15,000 folklorists participated, and the column was 12 kilometers long. Unfortunately, the record was not broken, because the circuit broke into two or three parts, it did not remain compact.

The cultural and artistic association "Dr Mladen Stojanović" from Mladenovo marked half a century of work in 2019 with a big concert with about 80 performers.

They are trying to pass on to future generations the values of the homeland that was brought to the Bačka plain after the Second World War by ancestors from Bosanska Krupa, Glamoč and Kupres. After settling, they preserved and preserved their heritage through housework, customs, song and dance. At that time, almost a thousand students attended Mladen's primary school, and educators were the initiators of the work of folklore and other sections. The forerunner of the 50s of the last century was the company "Branko Ćopić", and since 1969 the KUD "Dr Mladen Stojanović" has been registered.

The society is especially proud of the men's and women's singing group, which won numerous awards at performances throughout the SFRY, and in the 70's they received the October Award of Backa Palanka.

It was founded on November 29, 1947, after the arrival of the Krajina colonists from Bosanski Petrovac to Chib, as Chelarevo was then called. With the arrival of Krajisnik from Podgrmec to flat Vojvodina, they continue to nurture traditional values, especially song, dance and acting skills.

They quickly blended in with the local population and nurtured cultural values together. Starting in 2013, KUD expanded its field of activity and, in addition to traditional dance and song, introduced stylized folklore that was of special interest to children, and today KUD has about 80 members.

Within the society, there is an older and younger female singing group, four folklore groups: preschoolers, a middle group of elementary school students, an older performing group and a recreational group, and an orchestra.

In 2019, they were in the Republic of Srpska, where they participated in the festival of cultural societies "Petar Kočić", and they are proud of their international event "Kočić Days", where they present traditional songs and dances. The goal of this event is to get to know the folk traditions of other nations and preserve one's own.

On November 1, 2001, KUD "Mileta Protić" started working as a section at the elementary school "Mileta Protić". Very quickly, at the beginning of 2002, it grew into a cultural and artistic society whose founder and general sponsor is MZ Tovariševo. Today, this KUD has about 70 members and works with two age groups.

For the sixth year in a row, KUD "Mileta Protić" has been organizing an international festival of children's folklore called "Ala volem kolo da igram". The guests of this festival, as well as the villages are: the Czech Republic, Bulgaria, Northern Cyprus, Bosnia and Herzegovina, Croatia and KUDs throughout Serbia. This festival is traditionally held every year in the second half of May and lasts for five days and gathers about 500 children from all over the world. Kud "Mileta Protić" has been a guest all over Serbia, and his participation in festivals in the Czech Republic, Bulgaria and Croatia stands out from his guest appearances abroad.

After many years of work with occasional ups and downs, the company lost 13-year-old member Nebojsa Nedimovic, who unfortunately lost the battle in the fight against a vicious disease. At the initiative of President Natasa Dorić, with the great support of the residents of Tovariševo, the Assembly passed a decision to rename the company the CTK "Nebojša Nedimović".

This company was founded in October 2003. There were 75 members who were divided into two folklore groups - younger and older, as well as the singing section. The association practiced in the premises of MZ Nova Gajdobra, which were given to them for use, where they managed to equip the hall in which they worked and practiced for a long period of time with the work action of their parents.

From the first days of its founding, they joined the Amateur Association of the Municipality of Bačka Palanka, and since its founding, over 300 members have passed through the KUD. In the beginning, KUD had three sections, in addition to folklore, art and singing. Today, they have only a folklore section and occasionally a singing section because they are not able to hire an ethno musicologist. The folklore section works in three groups: preparatory (two groups beginners and older) and performing group.

Some of the most important awards are: silver and bronze Opanak in Valjevo, silver and gold plaque of the Provincial Folklore Festival in Novi Becej and Backa Topola, gold diploma of Trebinje in 2008, folklore ensemble silver plaque in Bijeljina, while one of their favorite awards is diploma of Saint Basil of Ostrog, which they received for outstanding work and performance in the birthplace of this important Saint, miracle worker and healer, whose relics are kept in the Ostrog Monastery.

The association was founded in 2002 with the aim of enabling children and young people to get to know their cultural heritage, develop talent in the field of dance and song, as well as performing and fine arts, and to socialize and meet young people from the surrounding area, from other parts of the country and abroad. .

During the years, the folklore, drama, art and singing sections were active in the Society, as well as active women. The folklore section has existed continuously for 15 years and has been very successful.

Due to circumstances, due to fewer and fewer children in the village, difficulties in the work of the management and financial problems, the folklore section stopped working, and now an extraordinary female singing group is active.

From the very beginning, the Association organizes two events a year: "Parožani Paragama", where it presents its achievements during the year, and "Svetosavski bal" dedicated to the feast of St. Sava, which is the glory of the Association, with a special program in which villagers participate. For years, the folklore section has performed at folklore festivals, at events in the surrounding areas. She also went abroad to folklore festivals in Bulgaria and Macedonia. KPD "Parage" justified its existence among young people, and in the whole village.

KUD "Logovac" from Despotovo was founded on August 20, 2000 on the foundations of KUD "Napredak", which was founded in 1974. They chose the folk game of the same name Logovac for the name of the Association and registered under that name and at the same time became active members of the Amateur Association of the Municipality of Backa Palanka.

The KUD is divided into three sections: the folklore section, which includes the youngest, middle-aged and veterans, then the tamburitza section (younger and, if necessary, older) and the choir section and the accordion section.

In 2011, the children's tamburitza ensemble recorded a CD called "The Page of My Time", the following year they won gold in Bačka Topola, and in 2015 they also won gold at the Children's Festival of Vojvodina with a children's ensemble.

KUD "Blagoje Parović" was founded in 1968 with the aim of preserving the tradition of Serb colonists from Eastern Herzegovina. Since 1990, the Society has been introducing other games from all parts of Serbia and Bosnia and Herzegovina into its repertoire.

The winners are many awards and recognitions, and some of them are: First place in the show "Plum" and the title "Guardian of National Heritage", first place at the festival "Golden Opanak" in Valjevo, placement at the National Folklore Festival in Topola and winning third place etc.

The society currently has about 60 members in three sections, a folklore, male and female singing group and an orchestra. The goal of the society is, above all, to preserve the customs and traditions of the region from which our ancestors came, which are Eastern Herzegovina and Bosnia.

The events they organize in Gajdobra are: Petrovdan festivities, Rastanijada and Children's Folklore Festival. There are currently two children's groups working in KUD, younger and older. They have thirty members each.

KUD "Svetozar Markovic" from Obrovac has existed since 1974 and now has 120 members, ie. three ensembles, mostly composed of school children and youth. It cultivates the folklore tradition of the people and nationalities of Vojvodina, as well as other areas where the cultural and spiritual tradition of the Serbian people has been developed.

During the year, they organize numerous events, the most recognizable of which are "Days of Saint Panteleimon" and "Life in song and play". As part of some regular events, they also organize art colonies in which many painters take part, as well as children.

The Hungarian cultural and artistic association "Sandor Vecera" from Backa Palanka was founded in May 2001 and has about 300 members. They managed to found a singing group (for now it is not a choir), and the women's section is also working successfully.

There is also a literary section. Members of this section participate when there are larger celebrations and the preparation of several songs or speeches related to a significant event or person. This society also has a small library.

In February, during the Carnival, they have a Masquerade, and in October, they organize the Autumn Ball. Both events are traditional and well attended. A good Hungarian music group is in charge of having a good time, which, in addition to Hungarian, also performs songs in other languages.