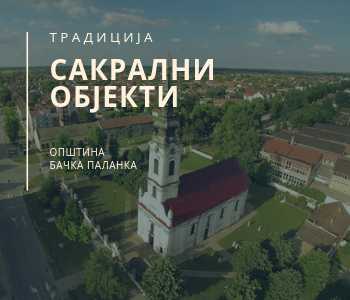 The Roman Catholic Church was built from 1782-1784. years. It was built in the Baroque style (it has been under state protection since 1984). The church is dedicated to St. Elizabeth.

The Slovak Evangelical Church was built in 1893. It is a single-nave building of smaller dimensions with a low bell tower of extremely rounded shapes and simple decoration. The church is located in Šafarikova Street, near the Danube, where even today the Slovak population lives.

The church was built in 1754 in the Baroque style. The interior is a richly carved iconostasis made by Marko Gavrilović and his son Arsenij Marković, and for the most part in 1773, it was painted by the greatest Serbian baroque painter Teodor Kračun, as well as Stefan Gavrilović (1800). Three icons from the old Neština iconostasis from 1741, the work of painter Stanoj Popović, have also been preserved.

An invaluable treasure is the icon from the throne of the Mother of God, painted by the priest Rafailo Miloradović from Bačka Palanka in 1724, for the Rašković family.

Iconostasis of the Orthodox Church in Neštin

In the church there is a miraculous icon of St. The Virgin from 1773. In addition, this church is especially decorated with an iconostasis with 45 icons by Teodor Kračun from 1759, 4 old throne icons from 1741, 9 kissing icons (the work of Stefan Gavrilović), 3 kissing icons by unknown authors.